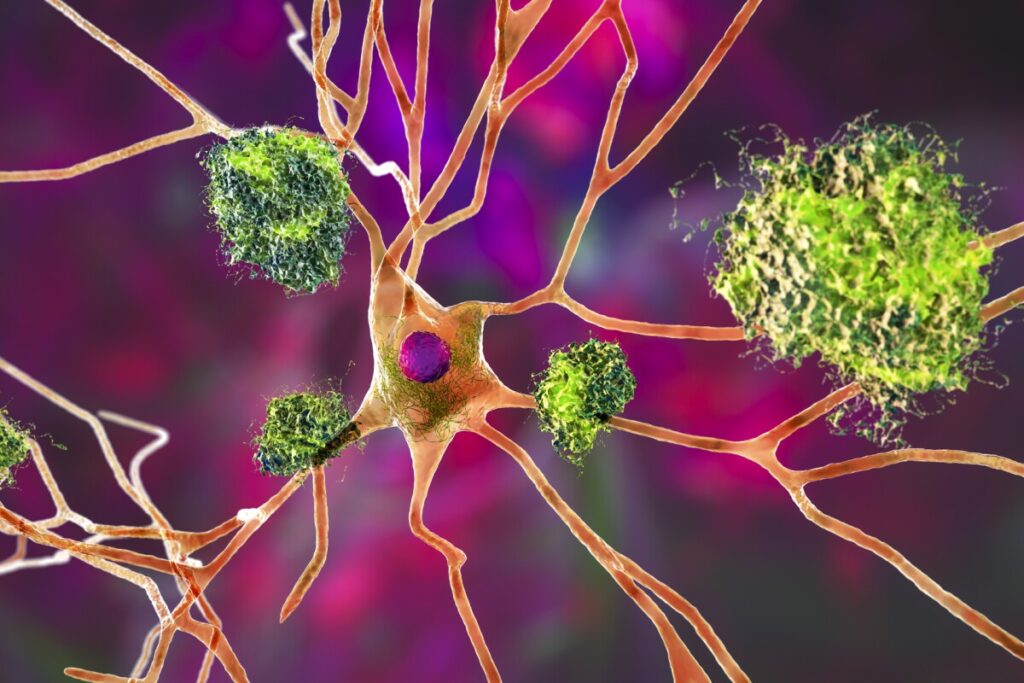 If you have read our blogs before, you are likely familiar with the two primary biomarkers of Alzheimer’s disease (AD), protein tau which forms neurofibrillary tangles (NFTs) and amyloid beta (Aꞵ) which forms amyloid plaques. Both of these contribute heavily to neuronal dysfunction, degeneration, and eventual memory impairment, but the relationship between them is complicated and has been the subject of research for several years. Evidence suggests that Aꞵ buildup instigates the misfolding of protein tau, eventually inducing NFT formation, however, tau levels better predict cognitive impairment than Aꞵ levels. More recently, researchers have expanded upon this by determining different stages of AD development as predicted by Aꞵ and tau.

Before explaining the stages, we need to have some prior knowledge. While we frequently refer to tau as a single protein, this is not necessarily the case. Tau’s full name is microtubule associated protein tau (MAPT), and in its normal form it serves as the rigid scaffolding that helps maintain the shape of axons, the communication bridge between neurons. The diagram below depicts both normal, healthy tau as well as the NFTs that form in cases of AD. It is believed that the presence of toxic Aꞵ proteins induce hyperphosphorylation of tau proteins, changing their structure. This decreases their ability to support microtubules and makes them prone to clumping together, inducing dysfunction both through the tangle of proteins blocking normal cellular functions in the brain and through axonal loss due to their lack of stabilization. 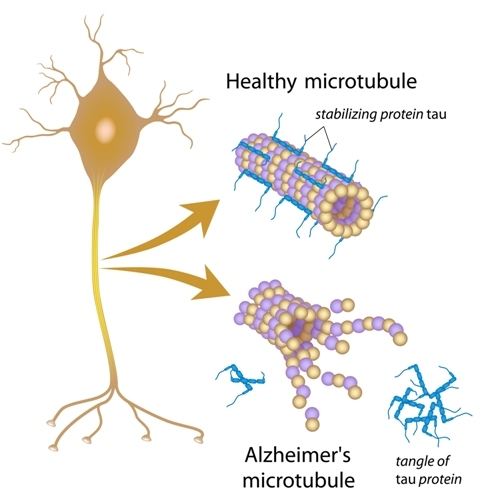 The specific locations on the protein at which tau can be hyperphosphorylated result in multiple different forms of tau, called p-tau isoforms. The most relevant isoforms to AD are p-tau217, 181, and 205. The presence, or lack thereof, of each type of tau predicts something different and generally correlates to a specific stage of disease progression. For example, an increase of p-tau217 and 181 without presence of NFTs predicts amyloidosis, the buildup of Aꞵ plaques in the brain before symptom onset. A rise of p-tau205 as measured by cerebrospinal fluid (CSF) correlates to waning brain metabolism and shrinking gray matter, the initial stages of degeneration but not yet producing dysfunction. Finally, as total tau levels spike in CSF, NFTs begin to form and cognitive decline begins. Interestingly, once NFT formation begins and global cognition starts to decline, the amount p-tau181 and 217 present in CSF plummets, presumably because these isoforms are being sequestered into the NFTs that are now forming. While this explanation for decrease in CSF p-tau levels is hypothetical, it is supported by the fact that the same phenomenon occurs with amyloid. The figure below from Barthélemy et. al. (2020) exemplifies this sudden change in p-tau and amyloid levels around the estimated year of onset (EYO). 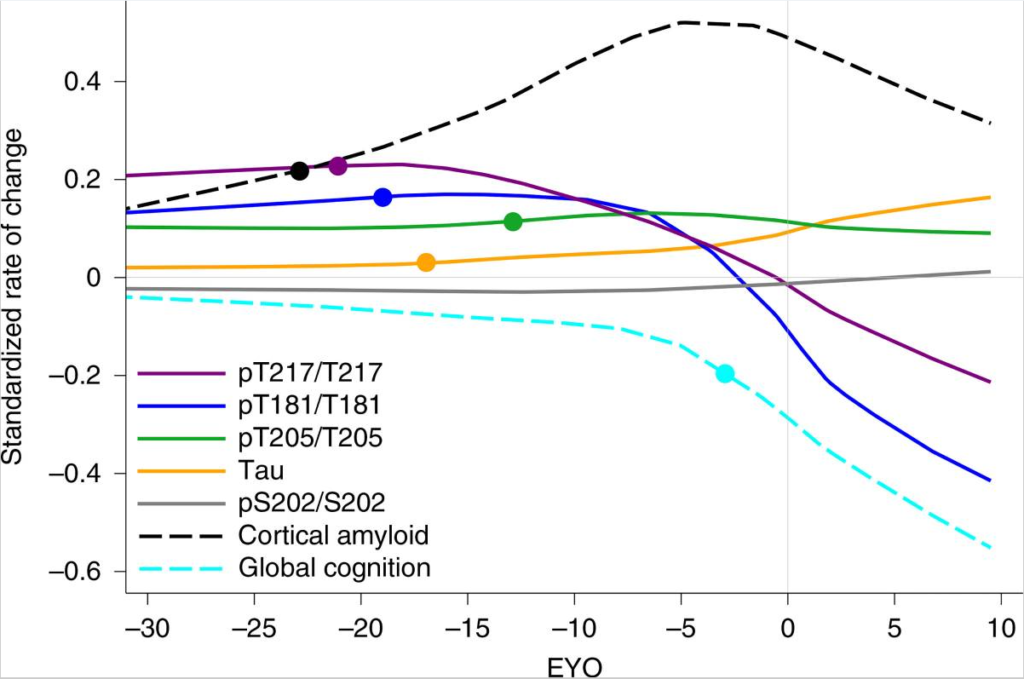 This information is extremely useful because AD therapies being tested in clinical trials utilize many different mechanisms to fight the disease. Using the different p-tau metrics above, it may be possible to more specifically gauge how far progressed a patient may be and what therapies are most likely to be useful. It is also projected that the increased specificity for placement in trials provided by p-tau measurements, as well as tau PET scans using a new and more accurate tracer, could reduce the sample size needed within clinical trials to find (or disprove) efficacy. Specifically, for trials on preclinical (asymptomatic) AD, using p-tau217 with tau PET scans was hypothesized to reduce required sample size by 43% and by 68% for MCI trials. Using either p-tau217 or tau PET alone would theoretically also result in reduced sample requirements, albeit to a lesser degree, with p-tau217 alone for preclinical AD trials reducing sizes by 31%, and PET alone reducing MCI trial sizes by 47%.

A decreased sample size with more specific subject selection could provide faster clinical trial outcomes with lessened screening times, and a decrease in the likelihood of a successful drug requiring additional data before coming to market. Should these staging procedures become a widespread method of pre-screening, patients are more likely to be placed into a clinical trial that will help them based upon their specific disease staging, whether that be clearing tau tangles, preventing tau aggregation, or clearing amyloid proteins before they even initiate the hyperphosphorylation of tau.