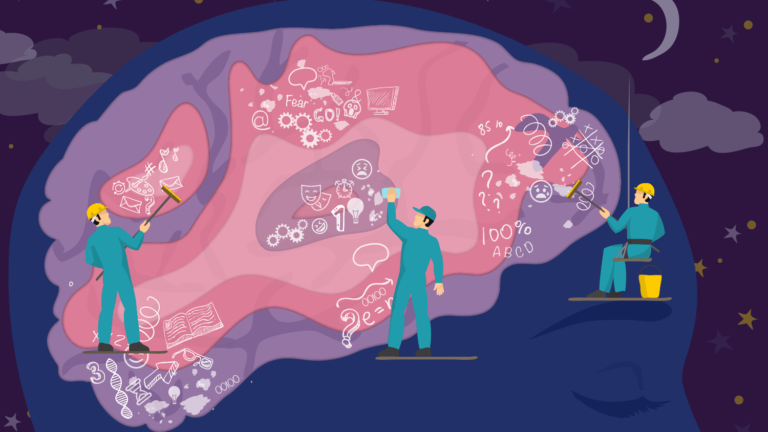 Sleep plays a critical role in our cognitive processing, maintenance of psychological health, emotional processing, consolidation of memories, and is when, waste products in the central nervous system are cleared. Previously we discussed correlations between neurodegenerative disorders and sleep problems, specifically about not getting enough sleep and how Alzheimer’s disease (AD) and Parkinson’s disease (PD) share similar sleep abnormalities. Common concerns about sleep in AD and PD include insomnia, excessive daytime sleepiness, or abnormal motor activity while sleeping. Although many factors are involved with sleep difficulties (e.g., medication side effects), AD and PD are diseases that can damage areas of the brain that control sleep, leading to further disruption in one’s well-being. However, a difficult question remains: which problem starts first? Does the pathology of AD or PD lead to an inability to attain sufficient sleep, or does non-optimal sleep aid in the development of cognitive decline, and further, a neurodegenerative disease?

A recent study showed that sleep problems likely precede cognitive dysfunction and that sleep duration predicts cognitive decline. The study gathered baseline average sleep duration and cognitive test scores from subjects aged 38 to 73 years old. Follow up data (i.e., average sleep duration, cognitive testing, neuroimaging) was collected about 8 years after baseline. An interesting finding emerged from the study, suggesting that not only was less sleep predictive of cognitive decline, but also too much sleep. Those who slept too much or too little than the average sleep duration overall (i.e., 7 hours) scored worse on tests of memory, fluid intelligence, reaction time, and executive function. Similar results emerged at follow-up, while the higher the reported abnormal sleep duration at baseline, the worse the cognitive scores at follow-up. The study indicates a “sweet spot” in consistent sleep duration, being about 7 hours, as test scores and mental well-being remained higher compared to consistent abnormal sleepers overall. Also long-term, consistent, under/oversleeping in middle adulthood is more predictive of worsening cognitive performance and mental health later in life, indicating middle adulthood as a critical period for sleep.

Gray matter deterioration is a prominent feature of AD due to neuronal loss, causing progressive cognitive dysfunction. Consistent with previous findings is the reduction of gray matter in the lateral orbitofrontal cortex and hippocampus, both of which are associated with poor or disrupted sleep patterns in older adults. Previous research linked sleep duration and cognitive decline potentially due to the disruption in slow-wave sleep, which is associated with memory consolidation and amyloid deposition, both prominent abnormalities in AD.

Overall, sleep has an important role in cognitive functioning and there are many factors involved with poor sleeping (e.g., genetic factors, medication side effects) or the development of a neurodegenerative disease. It is nearly impossible to identify a definitive cause, however research is continuously expanding to find potential preventative measures at best. In this discussion, although sleep disturbances may occur before the onset of cognitive decline and perhaps the development of a neurodegenerative disease, there may be hidden underlying factors associated with AD or PD pathology that are setting the course well before sleep disturbances appear.

Alzforum. (2022, May 11). Sleep: Too little, or too much, foreshadows brain shrinkage. Alzforum, networking for a cure. https://www.alzforum.org/news/research-news/sleep-too-little-or-too-much-foreshadows-brain-shrinkage