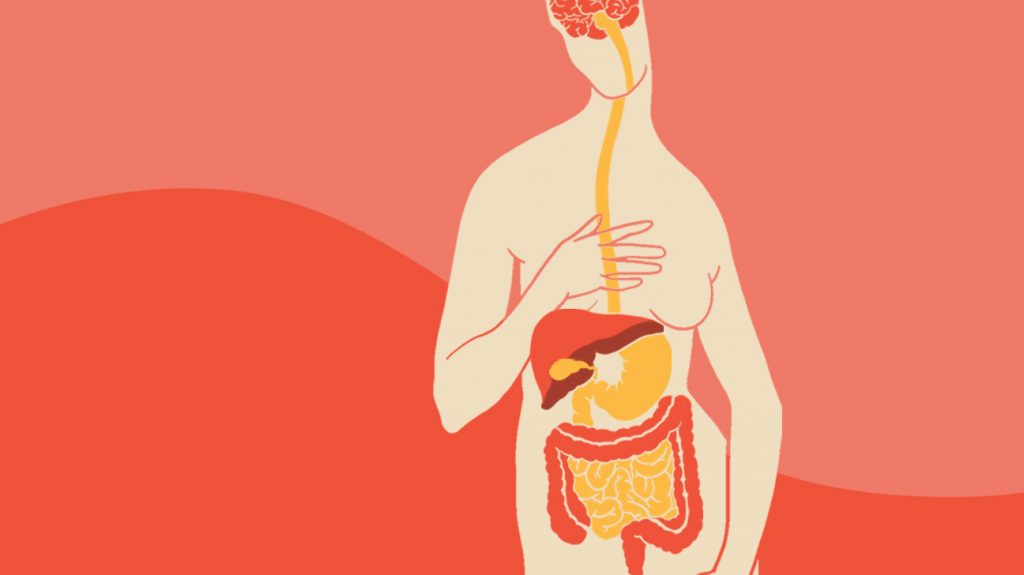 As we discussed last week, our microbiome has profound impacts outside of the digestive system including the central nervous system (CNS). The interaction within the Gut-Brain Axis is reciprocal; our brain communicates with our gut microbes via the enteric nervous system (ENS) consisting of over 100 million neurons responsible for modulation of intestinal contraction patterns, secretion of enzymes, and regulation of blood flow necessary for digestion. Through regulation (or dysregulation) of these functions the brain has a direct impact on the microbiome. Mice exposed to 1 hour of psychological stress for a week have irregular concentrations of microbes associated with intestinal disease.

When compared to mice not exposed to stress, the greatest change in microbial concentration was the loss of the bacteria Akkermansia muciniphila (roughly 1-4% of total microbiota) this loss was associated with increased insulin resistance, inflammatory responses, and metabolic endotoxemia.  Brain insulin receptors are concentrated in the hippocampus, a key structure for memory function.

Insulin resistance is associated with an increased risk for Alzheimer’s disease (AD). Healthy insulin signaling aids in the reduction of neuroinflammatory responses in the ENS and brain. Thus, stress induces an unhealthy feed-back loop in the microbiome that acts back on the brain to cause insulin resistance, increased neuroinflammation and cognitive worsening.

This feedback loop between the brain and microbiome highlights the importance of maintaining a balance of both mental health and gut health. Communication between the brain and gut biome occurs through three pathways in the nervous, endocrine, and immune systems. These pathways regulate gut motility, gut permeability, and intestinal hormone secretions that effect microbial gene expression.

The first of these mechanisms – gut motility, is regulated, but not initiated, by innervation from the cranial vagus nerve to the ENS in the form of the migrating motor complex (MMC). The MMC is a distinct electromechanical pattern in intestinal smooth muscles present during fasting. Impaired MMC regularity, caused by disrupted sleep and mood, decreases intestinal movement allowing overgrowth of small bowel bacteria and lowering diversity in the distal gut.

Second, the permeability of the intestinal barrier can be changed by stress causing a dysfunctional state known as “leaky gut” via changing epithelial cell permeability and the mucosal layer. In rats both acute and chronic stress increased leakiness of gut epithelial cells allowing microbes and their by-products into surrounding cells and the bloodstream where they caused inflammation all over the body. A “leaky gut” with an inflammatory immune response was also observed in mice after premature maternal separation and was reversed with antidepressant treatment. This result highlights the powerful role that the brain can have on the microbiome, and vice versa.

Third, stress decreases secretion of mucus by goblet cells in the gut resulting in a less protective mucus layer increasing ulcer risk and impacting the microbiome, particularly A. muciniphila that lives in and feeds upon intestinal mucus metabolizing it into short chain fatty acids (SCFAs). These fatty acids aid glucose homeostasis, lipid metabolism, appetite regulation, serotonin synthesis, and even immune function. In a healthy gut A. muciniphila stimulates mucus production leading to a healthy gut, brain, and body.

The microbes in our gut have binding sites for many of the molecules that our nervous, endocrine, and immune systems use to communicate. One example of this is serotonin, which can be released by enterochromaffin cells (ECCs) into the intestinal lumen where it acts upon Clostridiales, another gut microbe. In response to serotonin release, Clostridiales produce secondary bile acids and SCFAs that signal back to the ECC to upregulate serotonin signaling to the CNS through vagal/spinal circuits effecting mood regulation. Release of the “fight-or-flight” transmitter norepinephrine, increases virulent traits in microbes, as well as stimulating the growth of other strains of enteric pathogens. This may explain why strenuous life events that increase norepinephrine are associated with gastroenteritis and irritable bowel syndrome.

It is clear that there are numerous interactions occurring bidirectionally within the gut- brain axis that impact the brain and the microbiome. Unfortunately, the interactions from the brain to the gut are not nearly as well studied as those in the other direction requiring further research to parse the specific ways that psychological distress might translate to intestinal dysfunction. Furthermore, there are several disorders, including AD, anxiety, depression, Parkinson’s, and even Autism Spectrum Disorder,  that may effect interactions in the gut-brain axis but very few studies are able to confirm the direction of causality, and even fewer studies do so in humans.  There is research on ways in which we can nurture a healthy gut microbiome for both gut and brain health
that we will address in the next blog. Join us next time for the final piece of the puzzle in part three of The Gut-Brain Axis!